Technology In The Modern Office Environment

Halcyon days, where we are left to our own devices (read “no devices”), are gone: technology is taking over the world. But that might not be as bad as it sounds.

If you’re prone to opening a newspaper every now and again or sneakily flicking through a few news sites during that 2 o’clock lull at work, you’d most likely have come across the term “the Internet of Things”.

While this technology allows physical objects to do pretty cool things (Elon Musk’s self-driving cars or the fridge that orders milk from the grocers when it realises the dairy levels are running low!), employing it in the modern workplace could save millions of pounds and increase employee happiness.

As technology moves forward, it allows for the possibility of innovation in the office environment. Think, for example, of how offices used to be rigidly fixed because of the constraints of only having internet access by cable. With Wi-Fi becoming readily available – and secure – it opened up the door for designers and office planners to lay out office plans that are more intuitive and human-friendly. Technology in the office environment quite literally liberated it.

And now Wi-Fi and the Internet of Things is about to revolutionise the workplace again. In a recent article on BBC, it was noted that large corporations have started to embed hundreds of sensors into their buildings and the systems that keep it hospitable. This, in turn, can be connected to the internet, which makes the management thereof possible for staff.

Deloitte, in their Amsterdam office, at least, has employed technology that enables their employees to adjust the heating (let the battle between the sexes commence!), lighting and blinds via an app, while Arup, a building consultant here in London, are toying with embedding sensors in desks and allowing workers to control heating and lighting from them.

The article goes on to say that it is estimated that these “smart buildings” could save as much as 20% to 50% in energy bills – a good thing for the company’s pockets and the environment.

What does this mean for future furniture designs? With the current trend of Agile Working seeming to have made a lasting impression on the workplace, flexibility is paramount. While Felix de Pass said in a recent panel discussion held by Bisley, that the workplace should create a sense of belonging, we believe that it is important to note that it should do this, but in a setting where “nomadity” is still possible. 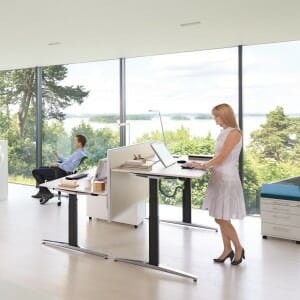 Hot-desking, done incorrectly, can easily alienate workers. When you don’t have an assigned workspace that belongs to you alone, losing that feeling of esprit de corps becomes a real threat to team cohesion and productivity.

We see a future where the technology in furniture is used to make employees feel like they are at home; where the designs intuitively adjust to the specific user’s preference when they enter the vicinity and make them feel a sense of ownership.

With height-adjustable desks becoming commonplace in the office, it won’t take too big a stretch of the imagination to imagine a situation where sensors in a vacant desk recognise a user’s predetermined preferences and adjust its height accordingly as the user approaches. Similarly, modern office chairs could adjust in stiffness, height and backrest position, where items like the Beatnik Sound Station Chair could automatically start playing a user’s playlist when he or she sits down.

While this is all still wishful thinking, we’re optimistically holding our breaths that this technology in the office environment becomes commonplace. 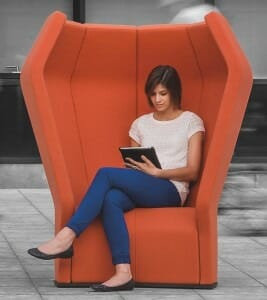 Add Some Creativity To Your Plush Office Environment

Working Remotely And Co-Working Spaces: An Ever Increasing Trend